Coating adhesion tests are used to assess the strength of several different planes, including the adhesion to the substrate, the adhesion of the individual layers of the coating system to each other, and the inner strength or cohesive strength of each of the coating layers. Some of the most common methods used for assessing coating adhesion include: ASTM D3359 “Standard Test Methods for Rating Adhesion by Tape Test,” ASTM D6677 “Standard Test Method for Evaluating Adhesion by Knife,” ASTM D4541 “Standard Test Method for Pull-Off Strength of Coatings Using Portable Adhesion Testers,” and ASTM D7234 “Standard Test Method for Pull-Off Adhesion Strength of Coatings on Concrete Using Portable Pull-Off Adhesion Testers.” The results obtained are not comparable between methods as they evaluate different adhesion properties and use different testing mechanisms. ASTM D6677 and D3359 evaluate the “shear” or “peel” strength of a coating, while D4541 and D7234 evaluate the coating’s tensile strength, meaning its resistance to a perpendicular pull. Selection of the coating adhesion test method is often determined by a governing specification or contract requirement; however, practicality is often a deciding factor. The pull-off adhesion tests are more objective and quantitative but require test equipment and time for the glue to cure. In contrast, the more subjective knife and tape adhesion tests can be done quickly with a minimal amount of equipment.

One characteristic that is common to all test methods, and perhaps the most difficult part, is selecting the appropriate test area(s). Once the areas are selected, one should consider three replicate tests per area that will yield representative adhesive data. The test areas should be free of grease, oil, dirt, chalking paint, and surface moisture, as these will interfere with the testing procedures.

There are four common test apparatus commercially available that conform to both test methods, including the Elcometer ® Model 106, HATE®, PATTI®, and the PosiTest® AT. Since these adhesion testers do not operate identically, caution should be exercised when comparing results. The HATE®, PATTI®, and the PosiTest® AT are self-aligning and, based on interlaboratory data produce consistently higher pull-off values compared to the fixed-alignment tester manufactured by Elcometer.

The Elcometer® model 106 uses a mechanical compression spring or washers to produce a perpendicular force onto the loading fixture. This force can be converted to pounds per square inch (psi) or MegaPascals (MPa). While the compression spring/washers is factory calibrated and cannot be verified, the instrument should be returned to the manufacturer or an accredited calibration laboratory annually so that a correction curve can be generated.

The HATE® (Hydraulic Adhesion Testing Equipment) uses hydraulic oil pressure to simultaneously push on the coated test surface while pulling on the attached loading fixture. This pressure is converted to psi directly on the instrument dial.

The PATTI® (Pneumatic Adhesion Tensile Testing Instrument) uses an air-energized piston to apply a perpendicular force to an attached loading fixture at a constant rate of pull. A conversion chart is used to convert burst pressure to psi or KiloPascals (KPa).

The PosiTest® AT Adhesion Tester works in much the same way as the PATTI tester. It applies a perpendicular force to an attached loading fixture at a slow, constant rate; however, it uses hydraulic pressure to apply the force rather than pneumatic pressure. It does not require a conversion chart, automatically corrects the pounds of force for the diameter of the loading fixture, and the pull-off strength can be read directly from the instrument dial or display.

ASTM D4541 and D7234 have a few differences beyond the test substrate. ASTM D7234 requires that coatings applied at greater than 20 mils be scored down to the concrete prior to attaching the loading fixture to remove the effect of

lateral bond strength during testing. When scoring, greater care must be taken to ensure that any excess glue used to attach the loading fixture does not flow into the grove created by scoring.  Another difference relates to the size of the loading fixture (2-inches, or 50 mm). The 50 mm diameter loading fixture size accommodates testing over a more representative surface area, since concrete can be non-homogeneous. According to the standard, the applied load rate should not exceed 30 psi per second, to complete the test in 5 to 30 seconds. This is different than the standard for coatings on metal, where the pull rate cannot exceed 150 psi/second. Finally, while concrete has high compressive strength, it frequently exhibits low tensile strength (e.g., 400-500 psi), so frequently the concrete fractures first and the actual bond strength of the coating is unknown (although greater than the tensile strength of the concrete).

Section 4: Significance and Use

Section 4.2 cautions the operator about comparing different sets of results on the same coating or coating system (or performing a statistical analysis of test results) when different test variables are employed, including type of apparatus (there are five), substrate, glue type, test procedures (e.g., pull rate), whether scoring of the coating around the perimeter of the loading fixture was employed, and environmental conditions. While the 2009 version provided a similar precaution, it only listed type of apparatus and substrate type.  One of the most important take-aways is that the results obtained with different types of testing equipment should not be compared, even when the types of equipment are included in the standard. 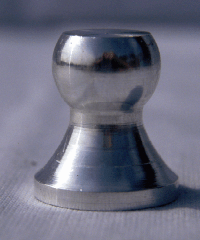 Section 5.1.1 (Loading Fixtures) provides additional information regarding the size of the loading fixture, since some adhesion tester manufacturers now provide various sizes of loading fixtures (e.g., 10mm, 14mm, and 20mm, pictured) for testing coatings on metal surfaces (although not addressed in this standard, 50 mm diameter loading fixtures are used for testing the adhesion of coatings on concrete). The section now includes the following statement: “Optimal size of the loading fixture is determined by the adhesion tester capabilities. The fixture and tester combination should be chosen so that the expected maximum pull load the coating will be subjected to during the test is within the range of the tester.” Use of smaller diameter loading fixtures (e.g., using 14mm instead of the standard 20mm) enables the operator to test stronger coatings without exceeding the operating range of the test device.

Section 5.4 (Glue). The term adhesive has been changed to glue throughout the standard to eliminate any confusion regarding an “adhesive” coating break with a “glue” break. A precaution was added to “Select a glue that does not affect the coating properties, flow through the coating or attack the coating.” 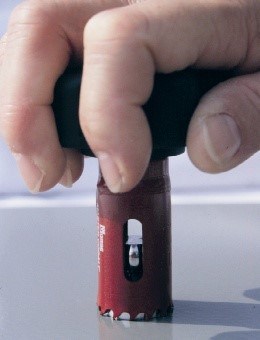 Section 6.7 discusses scoring the coating around the loading fixture (unless agreed upon by the contracting parties, scoring is not to be done unless the coating is thick film [> 20 mils], or is reinforced or elastomeric). A nonmandatory Note (Note 6) was added to provide further direction to the user when considering scoring. It states, “Scoring requirements will vary depending on coating system, chemistry, and thickness. A direct comparison of the unscored result to a scored result is one method to determine if scoring should be performed. Other methods for making this determination may be employed with agreement between the purchaser and seller. Scoring should not be considered for coatings less than 20 mils.”

Section 7.2 now includes a requirement to calibrate the adhesion tester per the manufacturer’s recommended frequency or every three years, whichever is less.

Section 7.6 addresses the rate of pull (maximum of 150 psi/second; complete the pull-off in 100 seconds or less), which was in the 2009 version; however, now the rate of pull employed must also be “similar” when performing multiple tests.

Section 8: Calculation or Interpretation of Results

Arguably the most significant changes occurred in Section 8, where two Test Protocols are now formalized. The two protocols are described below and illustrated in a Flow Diagram in the Standard. Managing glue breaks is particularly notable and is bolded and italicized for emphasis below.

Protocol 1 – Test to Fracture: Protocol 1 is typically used when the minimum adhesion/cohesion properties of the coating system are unspecified. In this case, the load is applied to the fixture until detachment occurs, or the maximum capacity of the test instrument is reached. High levels of applied force may result in glue breaks prior to coating breaks (an epoxy glue is typically used to attach the test fixtures to the coated surface). According to the 2017 version of ASTM D4541, unless otherwise agreed upon by the contracting parties, test results are discarded for all tests where the glue break is in excess of ¼ of the loading area (test fixture area).

Protocol 2 – Pass/Fail Test: Protocol 2 is typically used when the minimum adhesion/cohesion properties of the coating system are specified. In this case, the load is applied to the fixture until the specified value is attained or detachment occurs, whichever happens first. High levels of applied force may again result in glue breaks prior to coating breaks. According to the 2017 version of ASTM D4541, if a visibly detectable glue break occurs (defined as 5% or more of the loading area) and the specified minimum value is not attained, additional loading fixtures may need to be attached and pulled.  If the specified value is achieved and the test fixture remains attached, the pressure is released, and the adhesion tester removed.  The test fixture is either left in place or removed by tapping the side with a hammer to break the bond.

Two nonmandatory notes were added to Section 8 as well. The first (Note 9) cautions the user that any amount of glue fracture will result in a reduction of the maximum test load measured by the testing apparatus. That is, when a glue break occurs, the actual adhesive/cohesive properties of the coating/coating system remain unknown, but it can be concluded that the pull-off strength is at least as good as the values obtained. The second (Note 10) addresses use of this method when testing elastomeric coatings. It cautions the user that an elastomeric coating may elongate, and if the elongation or strain is sufficient, then the failure can be induced by a simulated peel type load, starting at the edges of the scored sample (remember Section 6 indicates scoring may be required for these types of coatings). To reduce this effect, proper scoring and test fixture alignment techniques should be employed, and low loading rates should be avoided to reduce the time the elastomeric coating is under stress.

Two nonmandatory notes were added to Section 9 as well. They address cautions about characterizing a test area (Note 11) based on high or low results and incorporating test data that involved glue failures in a statistical analysis (Note 12).

Note 11 states, “When testing in a specific location, the highest results obtained may be the most representative. The most common errors made during the testing process lead to artificially lower results, typically not higher results. Characterizing a test area based on an apparent low or high individual result should be done with caution.”

Note 12 states, “Use caution with statistical analysis of data, such as averaging of results, for test results that include glue failure, termination of the test, or exceeding the capacity of the test equipment. The reported load for these types of test results are not representative of the maximum load capacity of the coating tested.”

Coating adhesion tests are used to assess the strength of on several different planes, including the adhesion to the substrate, the adhesion of the individual layers of the coating system to each other, and the inner strength or cohesive strength of each of the coating layers. Tensile (pull-off) and shear (peel back) adhesion testing methods are quite different and their results are not comparable. ASTM standardized testing procedures are available for most adhesion testing methods, but can be quite complex, especially when conducting tensile adhesion tests. This article provided general information on tensile adhesion testing equipment and procedures, and highlighted significant changes contained in the 2017 version of ASTM D4541. An article written by Raymond S. Tombaugh titled, “Coating Adhesion Testing using Knife/Tape Methods” focuses on the shear adhesion test methods and was published on KTA University earlier this year.