The wastewater industry poses some of the most significant corrosion protection challenges for industrial protective coatings. In this case study, coating failure in the form of peeling and delamination (on concrete) and blistering (on steel) was observed on the interior of a digester at a wastewater treatment facility after only five years of service. Removal of sludge from the digester revealed disbonded pieces of coating, which alerted the facility owner to the failure. Due to the relatively short period of coating performance and the importance of a properly protected substrate, an investigation into the cause of the premature coating failure was undertaken.

As seen in JPCL September 2016

The digester consisted of a concrete shell with a steel skirt plate situated at the top of the shell. A steel dome was attached to the skirt plate. The specification indicated that the operating temperature of the digester ranges from 95-to-131 F, and that a single coat was to be applied at a dry film thickness (DFT) of 125 mils on the concrete and 60 mils on the steel substrates. The specification listed several polyurethane coating materials that were deemed suitable for this environment. The coating selected for installation was one of the materials listed in the specification. The manufacturer’s product data sheet (PDS) listed a maximum service temperature of 120 F for immersion service and 180 F for dry conditions.

Because the contents in the digester were composed of sludge from a wastewater treatment plant, the environment would be considered immersion. The sludge included a mixture of organic and inorganic solids, grit, grease, scum and industrial solvents. Reportedly, small quantities of hydrogen sulfide, hydrogen and nitrogen gases were likely to be present as well. The design engineer for the digester reported that the contents were uniformly mixed to maintain consistent pH and temperature throughout the digester. Since the time that the selected coating material had been applied, the pH readings were reasonably close to 8 and the temperature ranged from 122-to-126 F.

The coating material above the operating level on the steel substrate was pale yellow, smooth, glossy and tough. The coating material, which was white upon original application, was extremely difficult to cut into with a utility knife. Adhesion was evaluated in these areas according to ASTM D6677, “Standard Test Method for Evaluating Adhesion by Knife” and was rated excellent (10). Fig. 1: Cross section of sample removed below operating level. All photos courtesy of KTA-Tator, Inc.
In stark contrast, the areas below the top of the operating level on the concrete shell were amber or brown in color, had a somewhat rough appearance and exhibited reduced gloss, creating a matte appearance. The amber or brown coloration of the coating indicates a more extreme case of discoloration noted in the pale yellow coating observed above the operating level. When the coating in this area was cut with a utility knife, it fractured along the cut and was more brittle than tough. The majority of the adhesion tests performed below the operating level revealed poor results. The coating exhibited a cohesive break within itself leaving a layer of coating on the concrete substrate.

There was significant coating delamination along horizontal bands on the concrete shell that appeared to correspond with various operating levels of the digester. When these delaminated areas were examined, they typically revealed a thin delaminating layer, with a heavier intact white, rough layer remaining on the concrete. The coating was white when installed, indicating a relatively recent cohesive break. Two areas were examined at existing delamination locations. The top surface of the coating material in these areas appeared to have discolored to a brown shade while the material just under the top exposed surface of the coating was much lighter in color.

Nine knife adhesion tests were performed on the coating applied to the concrete substrate, and eight of the nine tests revealed poor adhesion. Six of the eight areas where poor adhesion was observed revealed a break within the coating layer itself. Two of the eight failing adhesion tests revealed a separation between what appeared to be two layers of white coating, suggesting that multiple coats had been originally applied to this area.

To observe the condition of the substrate, the investigator attempted to remove the coating which proved difficult, reinforcing previous findings that the bond between the coating and the substrate was strong.

Detailed microscopic examination was performed to determine the number and thickness of the coating layers, as well as to look for the presence of contamination or other objectionable properties.

Examination of the cross-sections of samples from below the operating level revealed that the discoloration present on the surface of the sample chips penetrated the coating depth by a few mils (Fig. 1). The cross-section of a sample obtained above the operating level showed a consistent appearance in color and gloss throughout with the pale yellow discoloration appearing only on the surface (Fig. 2).

Fourier transform infrared spectroscopy was performed to determine if the samples collected in the field were chemically consistent with the laboratory-prepared control sample of the material selected from the listing in the specification. Considering the exposure to digester sludge, and the fact that the coating material was exhibiting a cohesive break (within itself), both the top and bottom surfaces of the delaminated sample chips from below the operating level on the concrete shell were analyzed.

The spectra of the bottom surfaces of the sample coating chips were chemically consistent with a urethane material, and more specifically were consistent with the laboratory-prepared control sample that had been selected from the list of products in the specification for the project. These results confirmed that a different coating was not substituted for the specified material.

The samples of blister liquid obtained from the blistered coating on the skirt plate were collected using syringes and deposited in sealed septum vials during the on-site investigation. If any solvents were present in the blister liquid, they could be identified using gas chromatography-mass spectroscopy (GC-MS). The analysis revealed the presence of solvents in the blister fluid, which were consistent with solvents listed on the safety data sheet (SDS) for the coating material used.

SUMMARY OF THE SITE INVESTIGATION AND FORENSIC EVIDENCE Fig. 2: Cross-section of sample removed above operating level.
Microscopic examination of disbonded coating indicated that the thickness was slightly below the appropriate range in the concrete shell area of the digester; however, it was 20-to-40 mils thicker on the steel skirt plate than was recommended by the manufacturer. Blistering was predominant in this area at or below the operating level. The actual operating temperature range of the digester (122-to-126 F) was a few degrees above the immersion service temperature limitations listed on the PDS (120 F). The brown discoloration on the top surface penetrated a few mils through the cross-section of the coating, indicating that it was not simply surface staining.

The solvents detected in the blister liquid were consistent with those listed on the SDS for the coating applied. The excessive coating thickness noted in the areas with the most severe blistering likely led to solvent entrapment and blistering of the coating.

Though the thickness may have been excessive and led to blistering of the coating in the skirt plate area, the thickness of the coating was only slightly below the recommended range in the concrete shell area, yet delamination, discoloration, loss of gloss and other changes in performance characteristics were observed. The poor performance of the coating in this area indicated that the failure was primarily related to inadequate material properties for this service environment. Due to the severity of the deterioration, complete removal and replacement of the coating was recommended. Laboratory testing (one-sided cell, per ASTM D6943 or NACE TM0174) using actual samples of sludge from the digester and maintained at the maximum operating temperature would help to screen potential coating system candidates prior to full-scale installations. 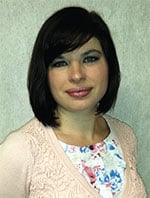 Chrissy Stewart is a senior chemist with KTA-Tator, Inc. Employed with KTA since 2006, she is heavily involved in coating failure investigation and comparative coating testing services. Stewart has achieved SSPC Protective Coatings Specialist (PCS) certification, is a voting member of ASTM and a past president of the Pittsburgh Society for Coatings Technology (PSCT), where she currently serves on the Board of Directors. She holds a Bachelor of Science degree in chemistry from Mercyhurst University, has had several articles published in JPCL and was featured in JPCL’s 2015 annual bonus edition, Coatings Professionals: The Next Generation.

4 thoughts on “Contradictory Information in a Project Specification – F-Files: Mechanisms of Failure”