When coating parts or structures, there are several application methods to consider, ranging from simple brush and roller to various types of spray application. The application method selected can be based on a variety of factors and conditions. This article focuses on two spray methods: conventional (air) spray and airless spray. 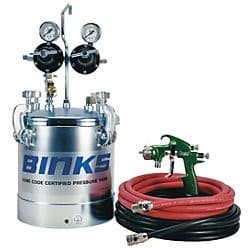 Conventional or air-atomized spray uses clean, dry compressed air to both transfer the coating from a pressurized pot into the material hose (known as pot pressure) and to atomize the stream of paint as it exits the nozzle of the spray gun (known as atomization pressure). There are two hoses that traverse from the spray pot to the gun; one contains atomization air (typically 50-75 psi) and the other contains paint (under pressure, about 25-30 psi). The spray gun itself has two controls; one controls the amount of paint that exits the spray tip and the other controls the shape of the spray pattern. Many conventional spray pots come equipped with agitators in case the product must be agitated throughout the application process. The proper gun distance (from the surface) is generally considered 6-8”. The operator can choose from a variety of spray tip/needle assemblies and air cap configurations, depending on the coating to be sprayed and the desired finish. The combination of these features provides the operator with greater control. This can be advantageous when applying coatings to small parts or complex structures. However, the transfer efficiency (the amount of paint exiting the spray gun that reaches the intended surface) is relatively low for conventional spray, and dry spray is common since the coating is atomized with compressed air. Also, since the atomization and pot pressures are relative low, viscous coatings may require thinning to atomize properly, potentially contributing to the release of greater amounts of volatile organic compounds (VOC) into the atmosphere. For projects involving a lot of square footage conventional spray may be cost prohibitive due to lower productivity.

High volume low pressure (HVLP) spray is very similar to conventional (air) spray, except the coating is atomized at much lower pressures (typically 10 psi or less) at a greater air volume (the number of holes and the size of the holes surrounding the spray tip and in the air cap are significantly larger, so a higher volume of air is delivered). 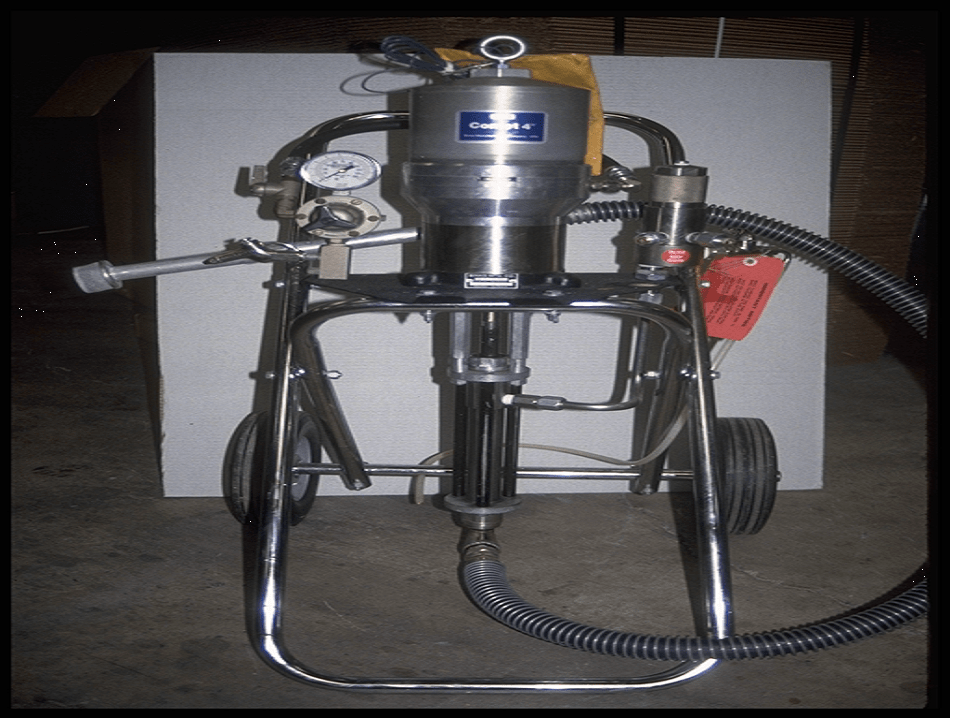 Airless spray application is the process of pushing a coating at high pressure (e.g., 3000 psi) through a small orifice (e.g., 0.023”), then releasing the pressure back to atmospheric pressure as the paint exits the spray tip. The pressure differential (high to low) causes the coating to atomize. The pressure is applied to the coating using a reciprocating pump that is operated using compressed air, electricity or fuel (gasoline). Airless spray is the most common method of spray application on industrial structures.

Since there is no fan adjustment on the spray gun itself, the shape of the fan as well as the amount of material is controlled by the spray tip. Airless spray tips are in thousandths of an inch (0.001”). A greater amount of material would come out of a 0.023” tip compared to a 0.017” tip. The size of the fan is also controlled by the tip. Airless spray tips are coded by the size of the fan and the size of the orifice. By doubling the first number of the spray tip code, the fan width is established at a distance of 12” from the surface. For example, a 517 spray tip would produce a 10” fan, as would a 523 spray tip; however, more material would come out of the 523 tip since the orifice is larger. A 719 tip would produce a 14” spray fan, while a 319 would produce a 6” spray fan. Even with the ability to control the spray fan width, the operator sacrifices some control compared to conventional spray. The proper gun distance (from the surface) is generally considered 12-18”. The transfer efficiency is greater than conventional spray (no billowing air exiting the gun with the paint) and the opportunity for dry spray is reduced but not eliminated. Viscous coatings are easier to atomize without thinner addition; however, tails at the ends of the spray pattern (poorly atomized coating) are common with airless spray and may be corrected by changing the pressure, adding thinner or replacing a worn spray tip.

In conclusion, there are several advantages and limitations to both conventional (air) and airless spray. Conventional (aka pressure pot) spray is best suited for smaller projects involving tight, complex configurations and that use a coating material that is less viscous, while airless spray is best suited for larger, less intricate surfaces where the primary goal is high production. Skilled applicators can use both successfully. Coating manufacturers list recommended equipment and pressures for the preferred method(s) of application on the Product Data Sheet (PDS). The PDS provides a good source of information especially when applying an unfamiliar material.

Air-assisted airless spray offers even greater control over the quality of the finish, but requires the use of clean dry compressed air, as air is used to help atomize the coating as it exits the spray gun.