In this month’s F-Files, blisters formed in a lining system installed on the interior of a raw water storage tank that was constructed at a new power plant. Because careful quality control and quality assurance inspection measures were taken from the time blast cleaning began through complete curing of the lining system, it was very surprising when blisters (as well as localized pinpoint rusting on the tank floor) were discovered during the first anniversary inspection.

Background of the Project

A new raw water storage tank was erected at the project site of the construction of a new coal fired power plant located in the east central U.S. The open top tank was 75 feet in diameter and 50 feet in height with a working capacity of approximately 1.6 million gallons. After erection of the tank was complete, hydro-testing was performed using water from a nearby creek to verify the functionality of the tank system. The interior floor and shell walls of the tank were bare rusted steel when the tank was turned over to the coating contractor for lining work.

Because of an unusually mild winter, lining work on the tank was able to begin in mid-March, and weather conditions remained favorable throughout the installation process. The contractor abrasive blast cleaned the interior tank surfaces according to SSPC-SP 10/NACE 2, Near-White metal, using a coal slag abrasive media that yielded a 2.0 to 3.0 surface profile depth. Following abrasive blast cleaning, the surfaces were coated with a three-coat, amine-cured epoxy lining system. The total dry film thickness of the lining system was specified at 12 to 16 mils. All aspects of the lining work went smoothly, as the lining was installed by a reputable SSPC-QP 1-certified contractor and was rigorously inspected by both the contractor’s Quality Control (QC) Inspector and the owner’s Quality Assurance (QA) personnel.

The project specification required that the tank be taken out of service and cleaned for a one-year anniversary inspection of the interior lining system. To the surprise of all parties involved in the project, blisters were observed in the lining system on the shell walls, and pinpoint rusting was evident on the tank floor.

Because the tank had an open top, a crane was used to place a lift unit inside the tank that was capable of reaching all coated surfaces. At locations where blistering and pinpoint rust were evident, visual observations were made with both the unaided eye and 50X illuminated magnification, adhesion was evaluated, lining thickness was measured, the steel surface beneath lining areas was inspected, and samples were obtained. The samples included lining chips and actual liquid that was extracted from unbroken blisters using a hypodermic syringe.

Blistered areas in the tank shell lining system were isolated to a few locations and were present in concentrations of 6 to 10 blisters, which ranged in size from approximately ¾ to 1 inch in diameter (Fig. 1). Some blisters were intact, while others had a small pinhole on the surface, from which a red-colored rust stain was seeping. Blister caps were removed from intact blisters to expose the underlying steel substrate, which showed a darkened, black appearance (Fig. 2).

What initially appeared to be individual pinpoints of rust on the tank floor, upon microscopic examination, turned out to be small metallic fragments that were embedded in the surface of the lining (Fig. 3). The particles were located on the tank floor adjacent to piping that was attached by angular steel brackets to the tank shell wall. The fragments had an appearance consistent with fine shards or particles of metal that is produced by grinding, burning (i.e., torch cutting), and welding operations.

Coating thickness measurements were acquired from various locations on the interior shell. Measurements were within the specified requirements and ranged from 12.4–16.2 mils with an average of 14.9 mils.

All of the steel beneath the removed areas exhibited the same black color as was observed when the blister caps were removed. The backside of the lining chips that were removed from these areas also had the same black-colored residue. At the point where adhesion improved, the appearance of the steel beneath the removed lining changed from the black color to a clean, bright metallic appearance and surface roughness that is consistent with Near-White metal blast cleaned steel.

The laboratory investigation in this case consisted of visual and microscopic examination, scanning electron microscopy-energy dispersive x-ray spectroscopy (SEMEDS), and ion chromatography of the blister liquid.

Microscopic examination (with magnification up to 200X) of lining chip samples supported the observations made in the field. The pinpoint rust observed on the floor was confirmed to be small rusted metallic fragments that were embedded in the surface of the lining.

SEM-EDS was used to analyze the black-colored residue on the backside of sample chips obtained in and around blistered areas (Fig. 4). The analysis revealed that the black material on the backside of the samples was composed primarily of carbon, oxygen, and iron.

Putting the Evidence to Work

The field investigation and forensic analysis yielded sufficient evidence to make conclusions as to why blistering and pinpoints of rust formed in the tank lining film.

There are some well-known mechanisms that fuel the process of blister formation and assist in the accumulation or concentration of moisture at given points within a lining film. Conditions that drive these forces are: contamination of the substrate by water-soluble salts, water-soluble solvents trapped within the coating film, and/or thermal gradients (temperature differences) across the coated surface.

The analysis of blister formation in the tank led the investigator to conclude that the isolated blisters formed as a result of the lining system being applied over water-soluble salts. Laboratory analysis detected chloride and sulfate concentrations in blister liquid taken from intact blisters on the tank interior shell wall. The presence of water-soluble salts beneath the lining created an osmotic cell that fueled the osmotic blister formation process and the formation of the black-colored oxide layer on the steel surface at these locations. The black-colored oxide layer was simply rust that formed in the absence of sufficient oxygen. When sufficient oxygen is present, corrosion products possess the red/orange color that is often associated with rust.

The tank was reported to have been hydro-tested using raw water from a nearby creek. Fortunately, the water from the creek was sampled on a bi-monthly basis to confirm that the construction project had no negative environmental impact on this waterway. Analysis of creek water samples taken during the hydro-testing of the tank revealed significant concentrations of chlorides and sulfates. As a result, it was concluded that the creek water was the likely source of the residual soluble salt contamination on the tank’s interior steel surfaces.

Although the substrate was abrasive blast cleaned after hydro-testing, dry abrasive blast cleaning did not completely remove all water-soluble salts from the steel surface. Because water-soluble salts are invisible, they are impossible to detect before coatings are applied unless specific test methods (i.e., extraction and analysis of surface samples) are employed. In the case of the raw water tank, it appeared that some isolated patches where water-soluble salts were likely more concentrated remained on the surface and were coated over, resulting in the formation of isolated blistering.

Blisters produced by water-soluble salt contamination on the surface form by osmosis; hence, this mechanism is termed “osmotic blistering.” Osmotic blistering occurs when there is ample moisture in contact with a coating film (i.e., immersion service), and there is a difference on each side of the film in the concentration of dissolved salts. This relative difference on each side of the membrane creates osmotic pressure that causes water molecules to slowly penetrate through the molecular infrastructure of the lining. As moisture penetrates, it attempts to dilute the more concentrated salt solution to reach equilibrium on both sides of the membrane. The moisture does not egress from the film as fast as it ingresses, and moisture accumulates causing a pressure build-up. As a result, an osmotic cell is created, and the driving force of osmotic pressure will accelerate the transport of water through the coating to further dilute the concentrated solution. Osmotic pressure can exceed 15,000 psi, depending on the soluble contaminants in the osmotic cell. Consequently, these pressures many times exceed coating adhesion to the substrate, and as a result, blisters form. Because the hydro-testing was done before the lining contractor and coating QC inspectors were onsite, they were not aware of the hydro-test process and the potential for surface contamination.

Small metallic fragments that had rusted were embedded in the surface of the coating adjacent to piping that was attached to the tank shell wall with angular steel brackets. Both field and laboratory microscopic examinations indicated an appearance consistent with small (often hot), metal fragments that are produced from grinding, burning (torch cutting), and welding. When these particles fall on a coated surface, they can actually “melt” into and become embedded in the surface of the coating.

It was also reported that, after lining work was complete, other crafts performed unanticipated retrofit work on the pipe supports in the tank. The work involved grinding, burning, and welding on the pipe supports after the lining contractor had demobilized. This post lining work was fast tracked to get the tank system online, and obviously, the embedded metal fragments were not identified and removed before the tank was filled. As a result, the metallic fragments rusted, producing a pinpoint-like rust appearance on the tank floor.

In summary, while rigorous QC/QA steps were taken during lining installation process, work performed by other crafts before the lining contractor’s arrival onsite and after they had demobilized had a significant impact on the performance of the lining system. A valuable lesson was learned: the entirety of the project must be considered when an immersion-grade lining system is to be installed. What occurs before the first and after the last gallon of coating material is applied can have an unforeseen impact on the long-term performance of the lining system. 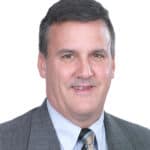 Jim Machen is a Senior Coatings Consultant with KTA where he has been employed for over 20 years. He is a NACE Certified Coatings Inspector Level 3 (Peer Review), an SSPC Certified Protective Coatings Specialist, and is a Level II Inspector in accordance with in accordance with ASTM D4537. In his current position, Jim performs consulting activities (i.e., coating failure analysis, coating system recommendations, specification preparation, and major project management) for a variety of clients in the transportation, water and waste, power generation, chemical processing, and marine industries.