Weathering steel, often referred to by the genericized trademark COR-TEN steel, is a group of steel alloys developed to form a stable corrosion-resistant surface after several years exposure to weather, potentially eliminating the need for painting in many environments. U.S. Steel (USS) holds the registered trademark on the name COR-TEN, which refers to the two distinguishing properties of this type of steel: corrosion resistance and tensile strength. The original COR-TEN received the standard designation A242 (COR-TEN A) from ASTM International. Newer ASTM grades are A588 (COR-TEN B) and A606 for thin sheet. All alloys are in common production and use.

Weathering refers to the chemical composition of these steels, allowing them to exhibit increased resistance to atmospheric corrosion compared to other steels. This is because the steel forms a protective rust patina on its surface under the influence of the weather. The corrosion-retarding effect of the protective layer is produced by the distribution and concentration of alloying elements in the steel chemistry (shown in Figure 1). The layer protecting the surface develops when subjected to the influence of weather. In other words, the steel is required to rust to form the protective layer.

Using weathering steel in construction presents several challenges. Ensuring that weld-points weather at the same rate as the other materials may require special welding techniques or material. Weathering steel is not rustproof in itself; if water accumulates in pockets or the steel remains damp constantly, those areas will experience higher corrosion rates, so provisions for drainage or drying must be made. Weathering steel is sensitive to humid subtropical climates, where it is possible that the protective patina may not stabilize but instead continue to corrode. Weathering steel does not perform well in areas that are subjected to heavy chloride exposure.  Weathering steel’s normal surface weathering can also lead to rust stains on nearby surfaces. For example, the U.S. Steel Tower in Pittsburgh, Pennsylvania was constructed by U.S. Steel in part to showcase COR-TEN steel. The initial weathering of the material resulted in a discoloration of the surrounding city sidewalks, known as “bleeding” or “runoff,” as well as other nearby buildings.

The rate at which some weathering steels form the desired patina is greatly influenced by the presence of atmospheric pollutants which catalyze corrosion. While the process is generally successful in large urban centers, the weathering rate is much slower in more rural environments. 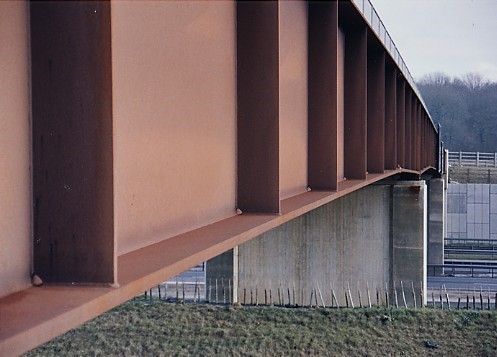 The rust layer that forms on ordinary hot rolled carbon steel is porous and detaches from the surface after a certain time, and the corrosion cycle commences again. The corrosion rate progresses as a series of incremental curves approximating to a straight line, the slope of which depends on the aggressiveness of the environment (Figure 2).

With weathering steel, the rusting process is initiated in the same way, but the specific alloying elements in the steel produce a stable rust layer that adheres to the base metal, and is much less porous. This rust ‘patina’ develops under conditions of alternate wetting and drying to produce a protective barrier that impedes further access of oxygen, moisture, and pollutants, significantly reducing further metal loss. Note that the surface must be able to dry for the patina to form.  If it remains constantly moist, weathering steel will continue to corrode.  Similarly, if the environment is heavily contaminated with chlorides (e.g., structures near the ocean or areas subjected to deicing salts that remain damp), the patina will not properly form.  But if the environment is suitable, weathering steel results in a much lower corrosion rate than would be found on ordinary structural steel. 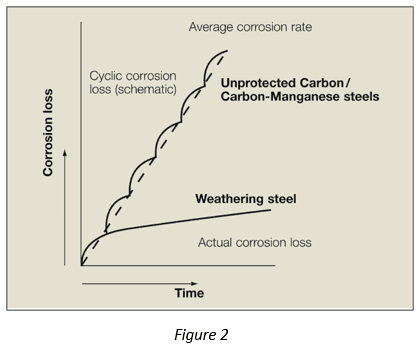 Standards for Preparation of Weathering Steel Surfaces Not to be Coated

New weathering steel develops a mill scale layer when it is manufactured (similar to hot rolled carbon steel); however, it is often a dark purple color instead of the traditional slate blue color. Specifiers frequently abrasive blast clean the steel with no intentions of coating it to allow the patina to form more consistently across the surfaces. The uniformity of the patina layer is for aesthetic value only; it does not affect the long-term performance of the uncoated steel. Specifiers frequently reference SSPC/NACE surface cleanliness standards (i.e., SSPC-SP 6/NACE No. 3 Commercial Blast Cleaning, or SSPC-SP 10/NACE No. 2 Near-white Blast Cleaning) since the desire is to remove 100% of the scale layer and initiate uniform “rust-back.” The initial formation of the patina layer will occur quickly, especially in humid environments.

Specifications for mild carbon steel frequently require that the steel after abrasive blast cleaning, be coated prior to deterioration of the surface cleanliness. An article posted to KTA University in October 2017 by Douglas J. Reardon of KTA discussed the variability in specification requirements for how long prepared carbon steel can remain unprotected – generally from a few hours up to 24-hours depending on prevailing conditions of temperature and humidity. However, this requirement is designed for steel that is being blast cleaned for coating, which is not the case with weathering steel that will remain uncoated. Owners, specifiers, and inspectors need to understand that the SSPC/NACE joint surface cleanliness standards for abrasive blast cleaning and the associated visual guide (SSPC-VIS 1) were prepared for steel that is intended to be coated, not weathering steel that will remain uncoated. Requiring shops to re-blast clean weathering steel due to formation of the oxidation layer (patina) is analogous to a dog chasing its tail – the task is never ending. It is important for inspectors to not only have knowledge of coatings, but also the type of steel used to fabricate a structure.  Mill Test Reports (MTRs) will reveal the type and chemistry of the steel. 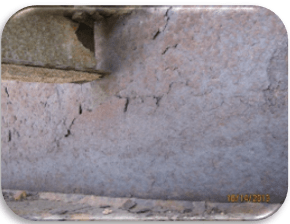 While weathering steel works well in arid environments, or in environments where the steel can dry out after it becomes wet, environments that are constantly wet or contain chemicals (e.g., deicing materials) deteriorate the patina layer, causing the steel to lose section. 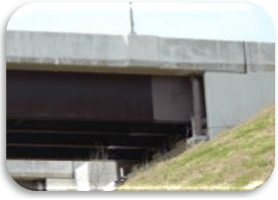 To combat this, portions, or all weathering steel members subjected to unacceptable conditions are coated (frequently brown to match the color of the weathering steel) to help prevent accelerated deterioration. In this case, preparation of the weathering steel by abrasive blast cleaning is recommended; however, references to the SSPC surface cleanliness standards may still not be appropriate. Rather, the specification should describe the intended level of cleanliness (e.g., removal of all visible mill scale & rust approximating SSPC-SP10, and a minimum/maximum surface profile depth). A zinc rich primer or barrier-type high solids epoxy primer with an epoxy intermediate, and a polyurethane, polysiloxane or fluorourethane finish coat will help prevent deterioration of the weathering steel substrate. Multiple coats may be required If the weathering steel is badly pitted from exposure. A KTA University article written by Bruce Rutherford (published to the site in January 2018) describes the challenges and possible approaches for measuring surface profile on pitted weathering steel after abrasive blast cleaning.

The use of weathering steel in the right environment can be an economical alternative to coated mild carbon steel that will require maintenance of the coating through the life of the structure. However, weathering steel is not a panacea and misuse can be costly. Case in point: the former Omni Coliseum in Atlanta, Georgia, built in 1972, never stopped rusting due to the constant high level of humidity in the environment, which eventually led to large holes in the structure. This was reportedly a major factor in the decision to demolish it just 25 years after construction. The use of properly prepared and coated mild carbon steel in high humidity environments is a much better solution. 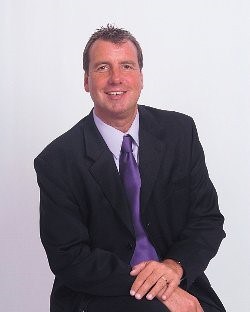 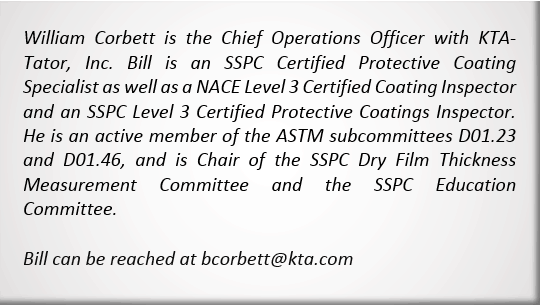