Measuring slip resistance of walking surfaces involves identifying applicable regulations; the appropriate test device and test method; surfaces to be tested (flat surfaces, ramps and stairs, areas of surface wear, contamination, and irregular flooring surfaces); and applicable types of footwear (or lack thereof).  With so many variables, the process quickly becomes complicated.  This article discusses only a few of the elections associated with each of these variables and organizations that provide direction to the flooring industry.  To begin, it is important to know which property are we truly measuring.  Static Coefficient of Friction (SCOF) measures the resistance of an object starting into motion, while the Dynamic Coefficient of Friction (DCOF) measures the amount of force required to keep an object in motion.  Each affects human locomotion safety very differently.  The one constant across principals and industries is that coefficient of friction (COF) is measured on a scale of 0 to 1, with 0 indicating no friction.

At one time, applicable regulations included those set by the Americans with Disabilities Act of 1990 (ADA) and the Architectural Barriers Act of 1968 (ABA). The ADA applies to places of public accommodation, commercial facilities, and State and local government facilities. The ABA covers facilities designed, built, altered with Federal funds or leased by Federal agencies. The Federal Accessibility Standards and Americans with Disability Act Accessibility Guidelines (ADAAG) of 1994 (28 CFR Part 36) and others incorporate “slip resistant” terminology.  Non-mandatory Appendix A (Section 4.5) to the Federal Accessibility Standards references a coefficient of friction of 0.5 as follows: “The Occupational Safety and Health Administration recommends that walking surfaces have a SCOF of 0.5. A research project sponsored by the Architectural and Transportation Barriers Compliance Board (Access Board) conducted tests with persons with disabilities and concluded that a higher coefficient of friction was needed by such persons. A SCOF of 0.6 is recommended for accessible routes and 0.8 for ramps.” The recommendation was missing one important thing: it failed to specify a means of measurement. The ADAAG had previously established a recommendation of 0.6, but the value was withdrawn in 2010. The standards require ground and floor surfaces to be slip resistant, but they do not specify a minimum value.

The 2012 International Building Code references ANSI A137.1 “American National Standard Specifications for Ceramic Tile”.  Per A137.1-2012, ceramic tiles selected for level interior spaces expected to be walked upon when wet must have a minimum wet DCOF AcuTest value of 0.42.  UL410 “Standard for Slip Resistance of Floor Surface Materials” is an Underwriters Laboratories (UL) standard that rates materials and surfaces as “slip resistant” if they achieve an index of 0.50 or higher on a James Machine with a three-inch-square leather pad.

ANSI A1264.2, “Standard for the Provision of Slip Resistance on Walking/Working Surface,” is primarily oriented to workplaces rather than public walkway areas. The standard specifies a threshold of safety of 0.50, and references several of the ASTM Committee F13 “Pedestrian/Walkway Safety and Footwear,” standards (including F1679, “Standard Test Method for Using a Variable Incidence Tribometer (VIT)”) as a means of measuring performance, and suggests some means of mitigating slippery conditions.

The James Machine (ASTM F489, “Standard Test Method for Using a James Machine,” and D2047, “Standard Test Method for Static Coefficient of Friction of Polish-Coated Flooring Surfaces as Measured by the James Machine,” in addition to UL410) measures the SCOF of polish-coated flooring surfaces. ASTM D2047 goes one step further to establish a compliance criterion to meet the requirement for a nonhazardous polished walkway surface. The value of data generated by this method is questionable because the SCOF is not applicable to someone walking across a polished surface. The test device is not portable, and is not intended for use on “wet” surfaces or on surfaces where the texture or projections on the surface do not permit adequate contact between the machine foot and the test surface.  Additionally, the test method uses a dry leather pad, which may give lower COF results than if a Neolite® or rubber pad were used. Because instruments utilize different sensors, geometries, and speeds of travel, correlations are impossible.

Horizontal Dynamometer (ASTM C1028, “Standard Test Method for Determining the Static Coefficient of Friction of Ceramic Tile and Other Like Surfaces by the Horizontal Dynamometer Pull-Meter Method”) devices were among the first used and were intended for ceramic tile, but C1028 was withdrawn in 2014 due to limited use.  Drag sled devices such as the BOT-3000 manufactured by Regan Scientific Instruments (formerly approved by the NFSI and recently replaced with the BOT-3000E) measures both SCOF and DCOF, and is portable. There is some debate about the accuracy of this device when testing wet surfaces. 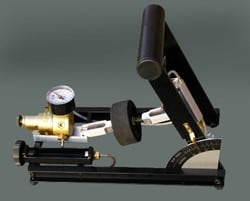 Articulated strut machines include the English XL VIT (ASTM F1679). This instrument is portable and measures DCOF under wet and dry conditions. Its action eliminates “stiction” concerns, stick-slip concerns, and excessive residence time as commonly seen with drag sled types.  The instrument offers an operator training and certification program.  ASTM F1679, as well as F1677 and F1678 (which cover the Brungraber Mark I and Mark II) were withdrawn from active ASTM standards for failure to include a precision statement and for reference to a proprietary instrument where alternatives exist.

The British Pendulum tester (ASTM E303) is portable and endorsed by the UK Health and Safety Executive. It has been argued that unreliable results are obtained under wet conditions. The German Ramp Test involves applying oil to a metal ramp and is conducted by a human walking on the surface.

Instruments can be evaluated per ASTM F2508, “Standard Practice for Validation, Calibration, and Certification of Walkway Tribometers Using Reference Surfaces.” Interestingly, the method has been updated five times since its inception in 2011.  It utilizes a set of standard tiles available for purchase.

A major change in the new OSHA regulations is the requirement that facilities be audited for floor safety by a “qualified person.” According to OSHA, a qualified person is “any person designated by the employer who is knowledgeable about and familiar with all relevant manufacturers’ specifications and recommendations; is capable of identifying existing or potential hazards in specific surroundings or working conditions which may be hazardous or dangerous to employees; and has been trained for the specific task assigned. When work is to be supervised by a qualified person, the qualified person shall have the necessary authority to carry out the assigned work responsibilities.”

There are several professional organizations that prepare standards and direct the field of pedestrian walkway safety. The National Flooring Safety Institute has a committee (B101) that develops standards under ANSI and maintains a list of approved tribometers.  The Tile Council of North America, American Ceramic Tile Association, and Safer Walkways Association are only a few among the dozens of groups.