Adhesion is an important physical characteristic of applied coating films and systems, and testing is frequently used as an indicator to whether an adequate bond exists between the substrate and primer (first coat) and/or between coats in multiple coat applications.  Adhesion testing may be a requirement of a coating specification, or may be used for coating system performance qualification in a laboratory.  Adhesion testing is also a valuable indicator for determining the integrity of coating systems that have been in service for extended periods of time, may require maintenance, and overcoating is a strategy being considered; and is frequently used during coating failure investigations. Irrespective of the application of the test, there are standard test methods (procedures) for conducting adhesion testing that should be followed to ensure consistency, especially when performing comparative analyses.  This article discusses tape and knife adhesion test methods performed according to standardized ASTM International. Tensile (pull-off) adhesion is the subject of an article by Melissa Swogger that is also available on the KTA University site.

ASTM D3359, Standard Test Methods for Measuring Adhesion by Tape Test (Tape Test) and ASTM D6677, Standard Test Methods for Evaluating Adhesion by Knife (Knife Test) are perhaps the most widely used tests to evaluate a coatings’ adhesion to the substrate and to other coats in a multi-coat system.  While tape and knife adhesion tests are generally regarded as more subjective than their tensile (pull-off) adhesion test counter parts, the tape and knife adhesion tests can be much more revealing of the true adhesion properties of a coating system.  Experience has shown that high pull-off adhesion values can be achieved on a coating system that is easily lifted with a knife, tape or in some cases one’s fingers.  This is primarily due to the directional forces applied to the coating system during the tests.

Adhesion testing performed according to ASTM D3359 or ASTM D6677 apply shear forces to the coating, while the pull-off adhesion tests (performed according to ASTM D4541 or ASTM D7234)[1] use tensile [perpendicular] forces.  The shear tests are oftentimes more definitive because they better replicate the way in which coatings fail.  That is, coatings generally do not disbond from a substrate or other coating as a result of forces that are exerted perpendicular to the surface.[2]  Rather, the coating peels off of the substrate or another coat because of shear (non-perpendicular) forces exerted on the coating system. Undercutting and peeling can occur as a result of shear forces.

Two test methods are described in ASTM D3359: Method A (X-cut), and Method B (Cross-cut).  Test Method A is primarily intended for use on coatings/coating systems over 5 mils (125µm, while Method B is generally used on coatings/coatings systems less than 5 mils thick Either method can be performed in the shop, field or laboratory.

The test was developed for assessing the adhesion of coating to steel, but can be used on other hard substrates.  The test has also been used successfully on softer substrates (e.g., wood and plaster). 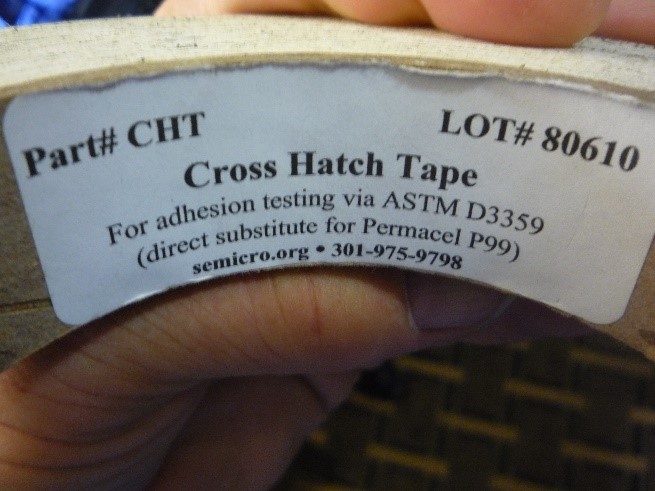 Both tests are performed by scribing the coating to the substrate with a sharp knife blade in a specific pattern, applying a pressure sensitive tape and then rapidly pulling the tape from the surface.  When the coating is greater than 5-mils thick an X-cut (with each leg approximately 1.5-inches long) is made in the film.  When the coating is less than 5-mils thick, a cross-cut lattice pattern is created with either six or eleven cuts in each direction.  For coatings up to 2.0 mils thick, eleven incisions are made that are spaced 1 mm apart. For coatings between 2.0 mils and 5.0 mils thick, six incisions are spaced 2 mm apart. For both methods, a steel or other hard metal straightedge or template is recommended to ensure straight cuts and, in the case of the X-cut, the correct angle at the intersection (30-45°).

Once the incisions are made, a pressure sensitive tape (with adhesive properties conforming to the requirements of the standard; Figure 1) is applied over the incisions and pressed in place using a pencil eraser.  Following a brief “recovery” period of about 60 seconds the tape is removed by grasping the free end of the tape and pulling it off rapidly (not jerked) back upon itself at as close to an angle of 180° as possible.  After removal of the tape, the amount of coating removed from the substrate or underlying coating is rated. It is important to evaluate the coated surface and not the back of the tape, since coating debris from the incisions is often removed by the tape.

Adhesion is rated based on the scale provided in the ASTM standard.  The scale ranges from 0 “Removal beyond the area of the incisions” to 5 “No peeling or removal.” When Method A is used an “A” is included after the numerical adhesion value (e.g., 3A).  Similarly, a “B” is added after the numerical value when Method B is used (e.g., 3B).  Table 1 provides the evaluation criteria for Method A; Table 2 provides the evaluation criteria for Method B.  The standard also contains a pictorial guide to aid in the rating of the cross-cut (Method B).

[2] The exception to this is osmotic blistering, where the coating is pushed off the surface as a result of vapor pressure from below the coating.  However, the subsequent delamination is a result of shear forces.

Similar to the tape adhesion tests, the Standard Test Method for Evaluating Adhesion by Knife (ASTM D6677) can be used to evaluate coating adhesion to steel and other hard substrates.  Precautions are included regarding the use of the test on coatings with a high cohesive strength that may appear to have worse adhesion than one that is brittle and fractures easily.  In addition, the method is not to be used on overly thick coatings that cannot be cut to the substrate with a utility knife blade in one stroke.

The knife adhesion test is conducted similarly to Method A of the tape adhesion tests in that incisions are made in the shape of an “X” (each leg 1.5-inches in length, with an angle of 30o – 45o) through the coating film down to the substrate.  The tip of a knife blade is then inserted into the intersect of the two incisions and used to attempt to lift the coating from the substrate or an underlying coating.

Adhesion is rated on an even number scale between 0 and 10, with 10 having the best adhesion and 0 the worst.  A description of the adhesion criteria is included in Table 3.

The Tape and Knife adhesion test procedures described herein include specific language to address “gray areas,” which require agreement between parties that are either requiring or performing the tests.  There are circumstances and situations that do not allow standard procedures and methods to provide an accurate representation of coating adhesion.  For example, laboratory testing is typically conducted under “standard” laboratory conditions of temperature and humidity; however, field testing conditions vary with the prevailing weather and are largely uncontrolled.  Variations in temperature and humidity can affect the efficacy of the method employed.

Heavily chalked paints typically show very good tape adhesion properties, since only the friable chalk layer is removed by the tape (the weakest plane), leaving the coating system intact.  The adhesion by knife test may provide a more accurate picture of the actual adhesion characteristics. If the tape adhesion test is required, the chalking should be removed from the area prior to performing the test.

Simply stated, the ASTM standard test procedures have limitations that need to be considered when making judgements or decisions based on the test results.  Make sure that any “gray areas” are considered and addressed by the stakeholders before testing is performed.