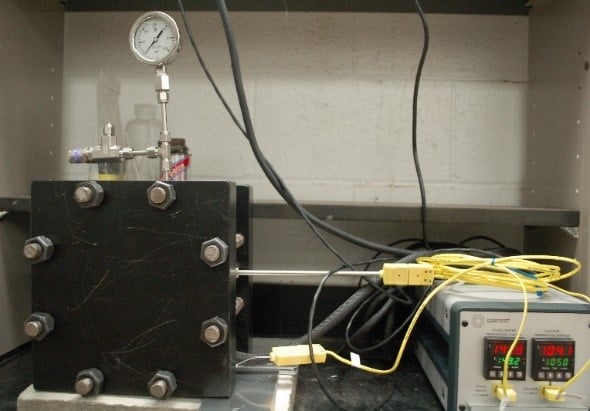 Coatings technology for lining of tanks, piping, and vessels has rapidly advanced in recent years. Extremely tightly-crosslinked coatings are relatively impermeable, and specialty resins and pigments are formulated into linings specifically to perform in extreme environments. Why, then, is it critical to further scrutinize these lining systems by subjecting them to conceivably unrealistic temperature gradients and pressures? And, since coatings and linings endure rigorous chemical resistance tests during formulation, why test them again? This article will discuss how and where well formulated, properly applied coating systems may be susceptible to attack, and will describe laboratory evaluation of vulnerability using one-sided (Atlas) cell exposure.

Permeation by moisture, solvents, chemicals, gases, and ions is a major factor in deterioration of a coating by causing disassociation of polymer chains, which ultimately compromises their protective capability. Permeation, even in the most densely crosslinked resins may be caused by microscopic fissures and pores to highly visible crevices and pinholes.

A common source of micropores and capillaries in the coating/lining film is solvent migration and evaporation following application. If evaporation is hindered due to low temperature or vapor saturation, the solvent or water can migrate and accumulate, causing a larger void. Low reactant temperatures that reduce mobility of the reactant can also lead to areas of incomplete crosslinking when the reacting groups do not come into sufficient proximity to react. Variability in crosslinking density and the presence of pigments and other additives can cause molecular separation that can lead to areas of vulnerability. Micropores can also be formed by rust deposits, dirt, and salts that prevent bonding, areas where crosslinking is less dense, feeding of fungus (mold or mildew) on ester linkages or phthalate plasticizers, or agglomerations of pigments not completely wet out by the organic binder.

Internal and external stresses can also cause micro-fissures. If a coating contains water or solvents, its volume decreases during evaporation. The shrinkage that occurs with the loss of volume causes internal stress in the coating and on the adhesion of the coating to the underlying surface. Crosslinking can further contribute to internal stress. In many coatings, crosslinking occurs slowly over time, even years, such that it slowly hardens and embrittles with age. Variations in thickness cause an uneven distribution of stress within the coating, further aggravating the potential for cracking or peeling. External stresses can include movement, flexing, vibration, impact, abrasion, and thermal expansion. Deflection of a member can be caused by wind, snow loads, ponding water, and various forces. Solar heating by day and cooling by night cause expansion and contraction of materials that can produce micro-fissures.

Because of its shear abundance in nature, any materials used must be resistant to the effects of water. The water molecule, since it is very small and light compared to all other molecules, can easily penetrate through any size pore. Because it can pack quite tightly, it can fill in any size space left by solvents. The pressure head (depth) of the liquid alone can create enough force to drive the water (or any media) into microscopic pores. Salts on the surface below the coating can promote water permeation through a coating film by a process called osmosis, which leads to swelling and reduction of protection. Disbondment and blistering result as the fluid disrupts the cohesive strength of the film and adhesion of the coating at the substrate. Coated concrete tanks and piping are particularly susceptible to osmotic blistering because of concrete’s high permeability.

But salts are not the only cause of osmotic blistering. Corrosion inhibitive pigments, including chromates, borates, and molybdates, are water soluble and may draw water into the coating film osmotically. They require water to partially dissolve the oxygenated metal inhibitor that then wet and passivate the substrate. Furthermore, water in addition to being small is also polar. Oxygen’s high electronegativity attracts other polar molecules, including itself. Areas where the covalent bonds are polar, such as ester groups, ether linkages, and carboxyl groups, may draw water into the coating film causing swelling, leading to molecular separation and possible chain scission. This is particularly true of retained solvents that are somewhat polar, such as ketones, esters, and alcohols. Tank bottoms are particularly susceptible to solvent retention, because the cool earth acts as a heat sink, and the sidewalls are warmed by the sun and air convection. The warmer temperatures promote solvent volatilization, while the heat sink results in slower evaporation. This can occur anywhere a heat sink is present, such as exterior steel supports, cradles, or bracing.

Any of these factors can exist in combination and have a synergistic effect on permeation. Add in heat, which breaks in molecular bonds because it increases the vibration and rotational movement of the atoms, and you have potential for disaster. With sufficient intensity, covalently-bonded molecules can separate to the extent that they are not able to recombine. Heat also increases molecular movement, which enables more rapid water penetration. Another complication is electrical current, which can further aggravate weak areas. An electric charge applied across the coating film, such as with impressed current cathodic protection or that resulting from a corrosion cell, can induce or accelerate permeation (electroendosmosis).  Pressurized pipelines and vessels that are lined are the ultimate trifecta for potential disaster as they have the combination of temperature, current, and pressure.

A one-sided cell, or Atlas cell, is a glass vessel containing a liquid that is used to determine the suitability of a coating material as a lining when exposed to a specific chemical environment. The candidate coatings are applied to one side of steel plates or concrete panels, then the plates/panels are attached to the ends of the vessel and subjected to exposure to both the heated test liquid and the contained gasses. Uninsulated steel tanks, piping and vessels used in oil and gas production and marine vessels often handle hot process fluids consisting of salt water, produced oil, methane gas, or some a combination of these products. Internal temperatures of 40 to 75°C can result in gradients of up to 115°C, particularly in the winter season when external temperatures can drop to as low as -40°C.  Cooling jackets on the outside of the coated plates of the Atlas cell control the temperature gradient between the internal media and the steel or concrete surface. The internal linings are subjected to the “cold-wall effect,” where increased molecular movement caused by a rise in temperature creates a driving force that attempts to draw the media into the coating towards the colder substrate. 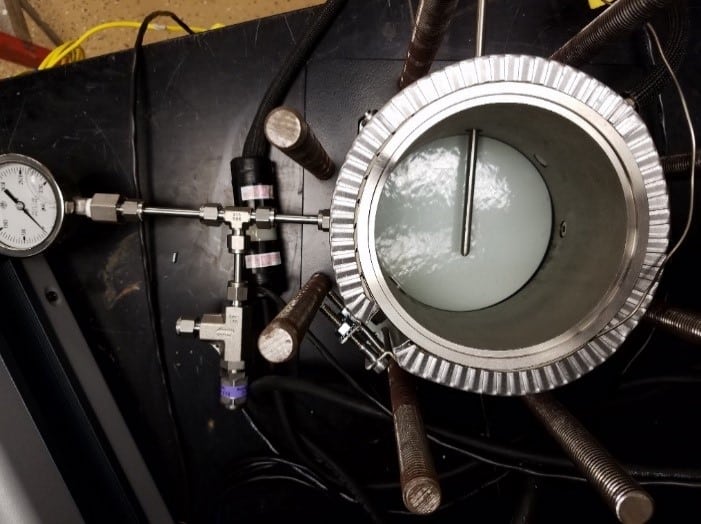 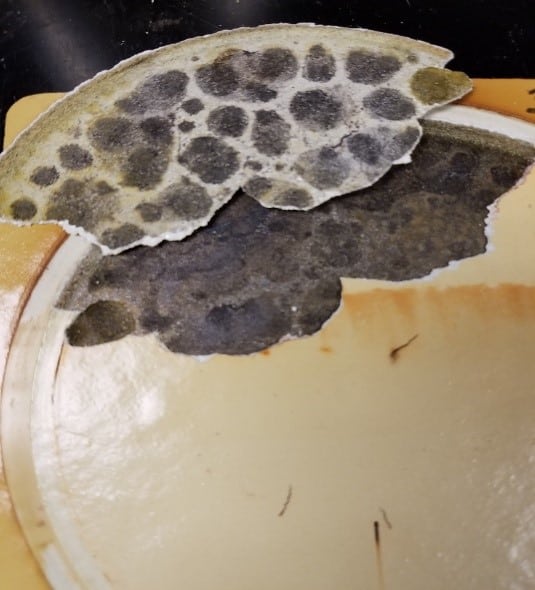 Pressurized Atlas cells can simulate the effect of pressure driving the liquid into coating pores; allow for exposure to a liquid at a temperature higher than its boiling point, or accelerate the rate of permeation for rapid testing. Temperatures up to 200°C (392°F) and pressures up to 14 MPa (2,000 psi) can be achieved using these cells.

Following exposure, the coatings exposed to the liquid and gas phases as well as the interface of the two phases are examined for blistering, rusting, and softening. The exposed areas can be further evaluated by Electrical Impedance Spectroscopy (EIS), which evaluates a coating’s inherent barrier properties.

Both ASTM and NACE provide procedures for testing coatings with Atlas cells: NACE TM0174 “Laboratory Methods for the Evaluation of Protective Coatings and Lining Materials on Metallic Substrates in Immersion Service” and ASTM D6943 “Standard Practice for Immersion Testing of Industrial Protective Coatings and Linings.” There are subtle differences between the methods, but they are similar. The ASTM procedure includes three ‘methods:’ room temperature, cold wall, and high pressure.  Parameters are suggested for each, but can be selected based on expected service. The NACE procedure lists possible test temperatures in the appendix, but does not detail cold wall or pressurized methods. The final evaluations are more defined in the NACE procedure, while the ASTM lists suggestions. Alternatively, testing can be conducted using custom test conditions as agreed upon by the facility owner and coating supplier.

This article has touched on many of the ways a coating/lining system can become compromised, including pores resulting from solvent evaporation, areas of low cross-link density, attraction of polar functional groups, and internal stress resulting from cross-linking, to name a few. Despite continuous improvements to coatings technology, the realities of demanding service environments challenge even the best of coatings, and laboratory evaluation of lining systems using one-sided cell testing (that incorporates temperature gradients, pressure, and immersion/vapor exposure) can help predict field performance.