Premature coating problems on the standing seam roofs of two school buildings were an eyesore for the community and an issue for the school board that was trying to improve the school’s image.

This article describes the site investigation, the forensic laboratory analysis, and what ultimately caused the coating to detach.Embarrassed that the four-year-old roof was unsightly, the board hired an independent investigator to determine the cause of the peeling and disbonding.

A visual inspection was performed to characterize the condition of the coating system on the roofs. Coating problems were observed to some degree in all areas; however, the vast majority of defects were concentrated on the horizontal, flat areas of both buildings’ standing seam roofs.

The extent and severity of the coating’s peeling and disbonding from the substrate over virtually all areas seemed to indicate that the problem was not a localized manufacturing or installation deficiency, but a much more fundamental problem.

Coating adhesion was assessed according to ASTM D3359, “Standard Test Methods for Measuring Adhesion by Tape Test,” Method B, Cross-cut, using 2 mm spacing between incisions. An assessment was then made according to the 0 to 5 rating scale (5B being best, and 0B being worst, indicating adhesion loss of greater than 65%).

The adhesion of the coating on the flat, horizontal areas of the panels was a 0B in every case. In fact, adhesion in those areas was so poor that 90-100% disbonding occurred on every roof panel—even when no incisions were made and the tape was applied to what appeared to be intact coating.

Conversely, the coating adhered much better on the vertical portion of the standing seams of each roof panel. These areas would not have been exposed to as much solar radiation from sunlight as the flat areas and thus would be less affected by ultraviolet light degradation.

Representative panels containing both failing and non-failing areas from both roofs were removed for forensic laboratory analysis. The following measurements and assessments were made during that investigation.

Visual examination disclosed that the coating system was spontaneously delaminating, or had very poor adhesion when probed with a knife blade. A cohesive split was occurring as evidenced by yellow primer on both the back of the delaminating color coat and on the substrate. However, most of the primer remained on the substrate, with a lesser amount attached to the back of the disbonded topcoat.

Samples from each panel were cross-sectioned with a diamond saw, mounted with epoxy, ground, polished, and examined using a digital microscope with 1000X magnification. Coating thickness was also determined using a destructive coating thickness gage conforming to ASTM D4138. The thickness of the coating measured during the field investigation was also included for comparison. The data are shown in Table 1.

The loss of adhesion in all cases was between the topcoat and the primer, with only traces of a visible layer of the yellow primer remaining on the underside of the topcoat. (The majority of the primer remained on the steel.)The coating system on all roof panels consisted of a primer that ranged from 0.1 to 0.4 mils thick and a topcoat that ranged from 0.9 to 1.7 mils thick. The average thickness of the total coating system was 1.5 mils.

Solvent resistance was determined according to ASTM D 5402, “Standard Practice for Assessing the Solvent Resistance of Organic Coatings Using Solvent Rubs.” This test is often used to determine the adequacy of a coating’s cure.

The solvent resistance testing was performed with cotton swabs (in addition to cheesecloth as prescribed by the method). Briefly, the cheesecloth or cotton swab was saturated with methyl ethyl ketone and the coating surface was rubbed with the wetted media.

Coating color transfer to the rubbing material was evaluated, as was any wear-through. The product data sheet listed a solvent resistance of 50+ double rubs when tested according to the ASTM standard method.

The finding: Color transfer and/or wear-through of the topcoat occurred at less than 50 double rubs.

As a result, it was decided to heat other sections cut from the panels and repeat the test. Heating often further chemically cross links and hardens a coating, making it more solvent-resistant. Panels were placed in an oven maintained at 435° C and held at that temperature for 20 seconds, after which the solvent testing was repeated.

However, the coating on the roof panels actually exhibited less solvent resistance after baking, while the solvent resistance of the control sample remained the same. Additionally, the coating on the panels removed from Building 1 had small, infrequent blisters (ASTM D714, No. 9 Few), with a diameter of 1/16 inch or less. The panels from Building 2 did not exhibit any blistering.

While not investigated, it is likely that the decrease in solvent resistance after baking was due to heating stress and deterioration of an already weathered topcoat.

Because the solvent resistance testing did not aid in assessing the adequacy of coating cure, differential scanning calorimetry was performed.

DSC was performed under a nitrogen purge. Briefly, this procedure consisted of placing a small amount of the coating in an oven and heating the sample over a temperature range to determine if it exotherms (gives off heat, which is indicative of a chemical reaction taking place, such as additional curing) or endotherms (absorbs heat, indicative of a phase change such as melting).

All five samples from Building 1 and Building 2 gave similar results to those obtained from the control. All heating curves revealed what appeared to be a crystalline melting point occurring between 152°C and 157°C. The field samples revealed a small glass transition at 90°C to 100°C, most likely a result of trace amounts of epoxy primer beneath the topcoat.

DSC testing of the field samples of topcoat gave similar results, which were also consistent with the results obtained from a control. Accordingly, there was no reason to believe the topcoat on the roof panels had been inadequately cured.

Infrared spectroscopic analysis was performed with a Fourier transform infrared spectrometer (FTIR). Briefly, the FTIR technique involves passing energy in the form of infra-red light through a sample, and measuring the intensity and wavelength of energy absorption. Molecular chemical groups absorb energy at characteristic wavelengths, allowing for identification of those chemical groups in the sample.

The FTIR analysis revealed that the topcoat was consistent with, and characteristic of, a polyvinylidene fluoride (PVDF) coating copolymerized with acrylic. When the topcoat from the roof panels was compared to the control sample, it was noted that the same spectral bands were present, but that bands’ intensity varied.

The intensity of the carbonyl band in the spectra varied, and its intensity appeared to be dependent on the degree of weathering/solar radiation (sunlight) exposure. The intensity of the carbonyl bond in the spectrum of the topcoat from the vertical portions of the standing seam roof panels was more consistent with the unexposed control than the coating from the flat horizontal areas of the same roof panel, which would have been exposed to greater weathering/solar radiation.

The yellow primer was consistent with an epoxy coating.

The coating deterioration on both of elementary-school roofs occurred as result of ultraviolet light degradation of the epoxy resin used in the primer beneath the colored, polyvinylidene fluoride (PVDF) topcoat. As the epoxy primer degraded, it disbonded, lifted and ultimately peeled.

UV light has sufficient energy to disrupt and break covalent bonds within an epoxy resin. The breaking of molecular bonds and the formation of free radicals by ultraviolet energy results in scission (breaking) of the epoxy primer’s molecular chain group of atoms and accordingly, a reduction in its molecular weight.Epoxy coatings are notorious for their susceptibility to ultraviolet light degradation. Ultraviolet light falls within the wavelength from 10 to 400 nanometers (1 nanometer is one-billionth of a meter). This naturally occurring energy from the sun has a shorter wavelength than visible light (400 to 780 nanometers) and is thus more energetic.

With continued exposure to sunlight, the epoxy primer embrittles, chalks, and loses its physical integrity. When this happens, the primer surface beneath the topcoat degrades and breaks down, causing a loss of adhesion of the topcoat to the primer.

The PVDF topcoat does provide protection of the epoxy primer from solar radiation. However, the PVDF resin itself is transparent to UV light, even when copolymerized with an acrylic. Accordingly, the colored topcoat must have UV absorbers and light stabilizers, as well as UV-resistant pigmentation incorporated into its formulation to resist solar radiation. Heat and moisture aggravate the problem and, in most environments, the underlying epoxy resin deteriorates quickly.

The primer had deteriorated to such an extent that the topcoat disbonded—in every case, at or within the upper surface of the epoxy primer layer. On flat, horizontal areas where no mechanical damage was evident and the coating appeared intact, the topcoat had poor adhesion to the prime coat.

The roof panels had a topcoat thickness averaging 1.4 mils, exceeding the specification requirement (0.9-1.3 mils). However, even with this additional thickness, extensive disbonding of the topcoat occurred, particularly on flat areas. On the vertical portion of the standing seams of each panel, the coating adhered much better.

FTIR identified the primer as an epoxy, which was susceptible to attack by UV light. The laboratory investigation also established that the epoxy primer on the topside of the roof panels was the same as the primer on the panels’ backside.

Correspondence from the coating manufacturer stated that the applied primer was an epoxy and subject to deterioration by UV light. The correspondence stated, “Epoxy primer: Excellent adhesion (sic), however poor UV (light) resistance. A barrier coat must be used for colors (i.e. blues, greens, reds, etc.) where hiding is questionable. An approved system becomes either 3 or 4 coats.”

The FTIR spectral bands of the PVDF topcoat from the roof samples differed in intensity from the PVDF controls. This was believed to be due to weathering, and this belief was confirmed when spectral band ratios of the topcoat taken from flat areas of the panels and from the vertical standing seam were compared with the controls.

Based on the field and laboratory investigation, the coating failure was caused by improper coating system selection. While the PVDF topcoat is commonly specified for these types of environments, a compatible primer must be used and must be resistant to solar radiation that will ultimately penetrate the PVDF resin. Complete removal and replacement of the roof coating was required, as ultimately the entire roof on both buildings was subject to continued peeling and disbonding over time. 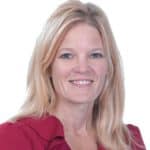 Cindy O’Malley is Vice President and the Group Manager of the Professional Services Business Unit for KTA where she has been employed for more than 20 years. In this position she is responsible for administration and management of the Professional Services Departments.  Her direct involvement with consulting and laboratory services includes managing coating failure investigation services some of which involve litigation support and expert witness testimony. Under Cindy’s direction, consultants, scientists, chemists and research & development specialists provide clients with independent analyses of coatings problems and advance the industry’s understanding of the performance characteristics of protective coatings and abrasive media. Cindy is an SSPC Certified Protective Coatings Specialist, is currently serving as the chairman of ASTM D01.23 which is the subcommittee for chemical analysis of coatings, Vice-Chair of STG 04 on Surface Preparation for NACE International, Past-President of the Pittsburgh Society for Coatings Technology, and a regular lecturer on the application of analytical chemistry to paint and coating failures, and physical testing methods. Cindy is currently pursuing an Executive MBA from the University of Pittsburgh, holds a B.S. from Pennsylvania State University and is a member of KTA’s Fundraising and HealthierYou wellness committees.